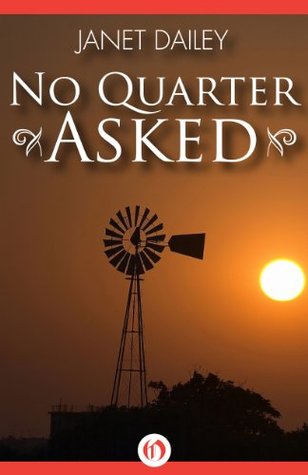 No Quarter Asked by Janet Dailey

Stacy’s world collapsed with the death of her father. She had to sort herself out; decide what she wanted to do with her life.

The secluded cabin in a Texas valley seemed a perfect place to think. But when Stacy met the arrogant rancher, Cord Harris, all her hopes of peace and serenity vanished. Especially when Cord said, “Go back to the city, where you belong.”

It was exactly the wrong thing to say to Stacy. It made her fighting mad–and determined to stay!

I quite enjoyed this book as a light, easy to read romance, that was reasonably short and quick to read.

I found that the story was a little predictable in its format and structure and it was obvious from the beginning, how things were going to end. This made the story feel rather formulaic, passing through the usual features present in a romance.

I liked how the initial ill feeling between Stacy and Cord, and their instant dislike of one another, advanced as the story progressed, right up until the final conclusion of the book.

The tension and antagonism between Stacy and Cord was well handled, although given the western theme I found it difficult to grasp all of the nuances of the interactions between them. It was interesting seeing the difference between the accepted manner in which a rancher would behave towards a woman, and the way a city woman would expect to be treated by a man.

I liked the character development, which I thought was very good, with just enough back story provided to allow mixed signals and confusion to creep in to their burgeoning relationship. It was fascinating to see how both of the main characters grew through the course of the book, adapting their views and beliefs.

Overall I enjoyed many aspects of this book and would recommend it to anyone wanting a quick, easy read, that does not require too much interpretation.

This review is based on a complimentary copy provided by Netgalley and the publisher, Open Road Media, as part of the Retro Reads Program.