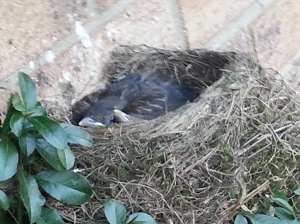 No, not me. I am not the one. However, I probably rather arrogantly, would like to take some of the credit for providing basic flight instruction, inspiration, and at the very least, encouragement and the provision of a nurturing, safe environment for Wilbur and Orville.

I came out to the yard this morning and instantly realised something was amiss. Either the babies are hunkered down in the nest, away from the wind, or they have flown the coop. Deserted their station. Left the nest. I hoped beyond all hope that they were still there. Or at least if they were not that they would come back to visit. I have poured out my love and affection. Provided my protection. I want to know that they are okay and that they will be happy as they journey through life.

So, somewhat perturbed at the situation and a little disappointed that daddy bird had reneged upon his promise I went back inside for a bit. Returning to pine at the nest a few hours later, and mourn my loss I examined their apparently uninhabited domicile further. It was indeed empty. No-one inside. Then I heard a sound. Not from the nest, but lower down, much lower.

Looking down I saw Wilbur on the ground hopping and fluttering his way, stumbling and tottering along. I ‘helped’ a little by providing encouraging words as little Wilbur, the baby birdie, hopped along the path, jumping and flapping his wings a few times, flying a few feet before walking a few more steps. 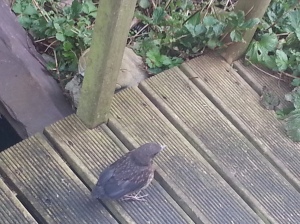 I encouraged him to take his first, well sadly I missed the very first when he must have left the nest, faltering flight. I imagine that the first would have been more of a rapid descent, than a flight. I sincerely hoped he would get the hang of a proper take-off soon so that he was not scrabbling around near ground based predators. He seemed clever and a quick learner so I had few doubts that would have his pilot’s licence pretty soon.

Daddy birdy came down for a look, perched on the fence, with a mid-morning worm snack. Hungry work flying lessons. 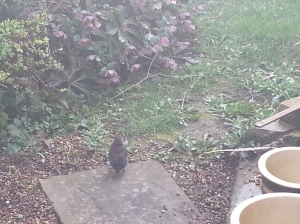 A little later I observed Wilbur, at least I think it was Wilbur, and not his sibling, perched atop a bush. I was pleased to see that he had managed to reach such impressive heights after his first tentative flops along the ground. He gave me a small smile, insomuch as one can discern a smile on the visage of a bird, more a glint in the eye and an imperious, self-satisfied turn of the head, I guess, and launched himself clumsily up into the air.

Now, when I say I say ‘up into the air’, I may be being a little disingenuous. The truth of the matter was that there was a noticeable downward trend to his course of motion, as opposed to that which ‘up into the air’ would generally tend to imply. Sadly I also heard the distinct sound of a thud from the other side of the bush. Bird met fence, maybe. Hopefully he is okay. ‘You need to fly over them, Wilbur’. I believe that he may need to work on his navigational skills, and possibly take a further course in the mechanics of powered flight. Still, I believe he is doing well, this being his first day in the air, and again I say it loosely, the air. All things considered, I am very proud of their progress and their first day at school, as it were.

Abandoned! The nest seems so empty on the wall. Well, I suppose that is because it is empty. Stark and lonely. That is how I would describe it. Orville and Wilbur are off exploring the delights of the English countryside, and no doubt sheltering from the bitter wind and frequent rain showers. I mourn their departure, but celebrate the wonder of nature that they represent.

Every so often I walk outside, my eyes drawn to the empty nest on the wall, unable to look away. Even all these years later, well hours (actually days, since it has taken me so long to write this) anyway, I can look at it and feel a gentle tug on my heart, no longer tinged with pain, as before, but remembering fondly our times together, divining the secrets of flight. The days we attended flight school together.

Smiling, I remembered the good times. 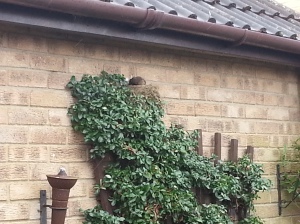 The End. Finally, I hear you cry.